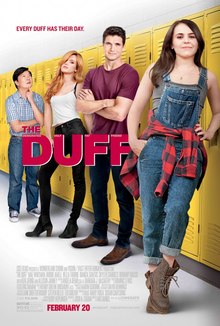 I will admit that I only heard of this book because of the movie being released; but as soon as I read the synopsis, I wanted to read it regardless of the movie.

I thought this book was very cute and funny but touching at the same time and I had a hard time putting it down (and I would have felt that way even if I wasn’t reading it during a road trip). I think a lot of teens can relate to some of the scenarios that happen in this book even if the circumstances aren’t the same as in the book. The situations never seemed petty or overly dramatic and I really appreciated that. I could see these things happening in high school and I loved that realism in this story. I’m sure it didn’t hurt that the author was 17 when she wrote it so she could draw from personal experience but I didn’t know that author was so young until I read the biography after I finished the book because it was so well written.

I could see why some people might not enjoy this book because Bianca is quite cynical. I can be quite cynical so I didn’t mind but I could easily see how she would rub people the wrong way. I thought she was a lot of fun to read about and I loved the interactions between her and Wesley. They made me laugh and melted my heart because I could see their relationship developing even when they didn’t. I’m a sucker for the reformed playboy and the independent heroine relationship (Ten Things I Hate About You anyone?) and it was done very well in this book. Wesley was the right blend of charming and caring and even I got a bit of a crush on him.

This book more than anything focuses on Bianca trying to navigate her troubled family and school life. Her relationship with Wesley, while a main plot-line of the novel, isn’t the main focus of the book but everything was in the right balance which made the book so addicting to read.

I really enjoyed this book! It straddled the line perfectly between being fun and serious and I easily powered through it. Fans of YA will love this one!

Similar Reads: She’s So Dead to Us by Kieran Scott (He’s So/She’s So Trilogy #1)

I knew before reading the book and before seeing the movie that both were going to be extremely different. Where the book focuses on Bianca navigating her messy family life, the movie focuses more on what it means to label someone and the consequences it can have. The book didn’t really worry about changing how people labelled other people in high school but it did focus on Bianca becoming confident in herself and that is also the underlying theme of the movie.

This movie was like Mean Girls meets a 90’s rom-com. While I didn’t find it as memorable funny as Mean Girls (my friends and I still use lines from Mean Girls today) I definitely laughed because some of the lines were so witty and fun. (It could have been because I saw it in a nearly empty theatre during a school day afternoon so I felt like I was the only one laughing) But, I felt like the movie did what Mean Girls did and showed the realistic side of high school and how teens can be just plain awful to each other–and it especially showed how social media plays a role today in belittling other people. I thought it was really well written and I think a lot of teens can relate to it. I really hope that teens watch this and realize how their actions/words can impact other people–even if it is as something simple as a nickname said behind someone’s back.

In the book, Bianca didn’t really focus on what it means to be the Duff as much as she did in the movie. So in the movie, instead of sleeping with Wesley to escape from her everyday life, she asks Wesley to make her over so she isn’t the Duff anymore–this is where it reminded me of the good ole’ 90s rom-com (She’s All That anyone?). But what stayed the same as the book was the great chemistry between Bianca and Wesley.

First, I think casting contributed whole-heartedly to this. I’ve only seen Mae Whitman (Bianca) the occasional time I would find my roommates watching Parenthood so I’m not too familiar with her or her acting. However, I thought she played Bianca perfectly! She had the cynical humour down pat and she was everything I expected Bianca to be. Now I might be biased about Robbie Amell because he is related to my TV crush Steven Amell’s (The Arrow) AND a Canadian hottie but I thought he did a great job as Wesley! He nailed the charming but slightly douchey jock role of Wesley. If you didn’t have a crush on him before this movie, you will after!

But their chemistry together really blew me away! I know that they had a lot of freedom with the script so they ad-libbed a few lines and when you see the character’s reaction, you know that it is the actor’s genuine reaction to that scene. Nothing beats a true smile or laugh in my books when it comes to movies. You can tell that they had a lot of fun making this movie and as a viewer it makes it all that more enjoyable to watch.

Long story short: I would definitely watch this movie again! It might not be the most accurate book-to-movie adaption ever but the message of the book is clearly reflected in the movie. It was a lot of fun and I’m sure if I watched it again there would be lines I missed the first time that would have me laughing out loud.

In this case, the winner is a TIE! Because the book and movie focus on different things it’s really hard to compare them to each other. I love the book because of the family issues Bianca has to deal with since they were very realistic to me. But I also love the message of the movie regarding school life and labels because they too are very realistic. Both are very well done and I think YA fans and teens will love both!

Synopsis for The DUFF (from Goodreads):
Seventeen-year-old Bianca Piper is cynical and loyal, and she doesn’t think she’s the prettiest of her friends by a long shot. She’s also way too smart to fall for the charms of man-slut and slimy school hottie Wesley Rush. In fact, Bianca hates him. And when he nicknames her “the Duff,” she throws her Coke in his face.

But things aren’t so great at home right now, and Bianca is desperate for a distraction. She ends up kissing Wesley. Worse, she likes it. Eager for escape, Bianca throws herself into a closeted enemies-with-benefits relationship with him.
Until it all goes horribly awry. It turns out Wesley isn’t such a bad listener, and his life is pretty screwed up, too. Suddenly Bianca realizes with absolute horror that she’s falling for the guy she thought she hated more than anyone.