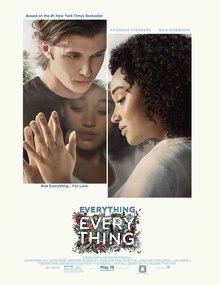 I’ve seen this book on countless blogs over the years and so it inevitably made it onto my TBR. I really wasn’t sure what to expect; I’m not a big YA contemporary fan and this looked like it could be an angsty romance depending on the way it was spun. But, as a healthcare worker, I was super interested in the SCID aspect so I went in optimistically.

I almost read this as an audiobook but I either read somewhere that there were illustrations or I previewed the novel and saw them. Anyways, I’m really glad I read this as a novel but I’m sure this would be a great audiobook because Maddy is a great narrator.

Which is why I gave this book a 5/5 on Goodreads though I would give the overall plot a 4/5. I loved Maddy’s energy. She was so endearing as a narrator to me and I immediately got sucked into her story. I truly had a hard time putting it down and it’s one of the only books in recent memory where I read it in one sitting.

I would give the overall plot a lower score just because it does stretch the realism of the situation a bit. But as I always say, let fiction be fiction and I knew I wasn’t reading it for realism. The situations and circumstances work well for this story in terms of entertainment and conveying the message that only you can determine what it means to live your life.

Don’t go into this expecting some super realistic book about a girl with an immune disorder nor expect a novel that delves deep into situations. This is really about a girl defining what it means to live her life and the joys of first love. It’s definitely a lighter, mostly romantic, YA contemporary.

Note: Do NOT watch the movie trailer if you plan on reading the book. As someone told me on Twitter, it kinda gives away the plot twist of the story (and it’s a really good twist that you likely won’t see coming otherwise). My review below does not contain any spoilers.

Yes, I’d say they were. The movie captured the light, feel good vibe of the novel. I was smiling like an idiot (on the airplane no less) as I watched Olly and Maddy interact and fall in love. Gah, it was so adorable!

Fairly close though the “main twist” had a different way of delivering itself in the movie. I think given the length of the movie that the approach worked well so I understand why the change was made. But the backbone of the novel is in the movie and it’s a very close adaptation when all is said and done.

YES! I thought the movie was cast perfectly. Everyone was great in their roles, particularly Maddy and Olly. They just had fantastic chemistry and truly captured the charm of their characters on the big screen.

The movie is great! Don’t get me wrong! But I just loved the book and how charming it was to me.

Synopsis for Everything, Everything (from Goodreads):

My disease is as rare as it is famous. Basically, I’m allergic to the world. I don’t leave my house, have not left my house in seventeen years. The only people I ever see are my mom and my nurse, Carla.

But then one day, a moving truck arrives next door. I look out my window, and I see him. He’s tall, lean and wearing all black—black T-shirt, black jeans, black sneakers, and a black knit cap that covers his hair completely. He catches me looking and stares at me. I stare right back. His name is Olly.

END_OF_DOCUMENT_TOKEN_TO_BE_REPLACED

Synopsis for Between Everything and Us (from Goodreads):
Matisse Evans is determined to make her sophomore year of college successful after failing out of a prestigious art school and spending a horribly boring gap year at home. Despite her focus, time isn’t on her side as she struggles to hold down three jobs so she can afford her first apartment while juggling course work. In the chaos of it all, Beau Grady moves in and shakes up her world. A college dropout and tattooed bad boy, the rumors about Beau mean one thing for Matisse—trouble. Paralyzed by the fear that she’s missing out on life, Matisse discovers plans may unravel, but what rises in their wake can be worth the uncertainty.

After spending the summer couch surfing, Beau Grady moves into an empty room at his ex-girlfriend’s Portland bungalow, skipping his senior year of college to spend his days working at a Vietnamese food cart instead. Once a star hockey player and gifted student, he’s put his life on hold after receiving a life-altering diagnosis, complacent to live in the moment. Hiding behind false rumors and bad habits, Beau falls for Matisse, letting her believe the worst until their relationship blooms into something they both can’t ignore. Falling for her means having to face a future he’d rather forget, but loving her just might be worth it.

**This post was originally published as a Fresh Friday review of the first book of the series. It has now been updated to reflect my conclusion to DNF this series. It will not be further updated.**

The cover of this book drew me to click on it when I was browsing Netgalley after creating my account but the synopsis is what made me want to read it. It sounded like it would be a book filled with sexual tension but great character growth–plus who can resist a bad boy hockey player? (I’m Canadian, what can I say!?)

While this book is a romance, I love that both Beau and Matisse grow individually. The vast majority of this book is spent with these characters trying to find out what the next steps in life will be in terms of school, health, career paths, parental relationships and, of course, their relationship. It isn’t always a happy story and that means it isn’t the easy novel to read because it is a little depressing at times. It’s raw and it makes you think about life.

However, I felt like the book focused too long on their unhappiness with their everyday life and not enough time on the romance (or dealing with Beau’s condition). The last 50 or so pages when that becomes the focus was the best part of the book to me. That is what I thought I was going to be reading and that appealed to me the most. That was when I got sold on Beau and Matisse being a couple and saw how/why they would care for each other. Up until that point I didn’t really get the connection between the two of them (besides the physical attraction).

Both Beau and Matisse are flawed characters which made this book enjoyable because you really get to watch them grow and mature. But I never fell in love with them. I think it was the overall tone of the book, which is slightly depressing and sad, that just stopped me from really enjoying their characters. I warmed up to them by the end but by then it was just too late.

It also didn’t help that I started to get a little more interested in the secondary characters, specifically the two that are the leads in the next book. I felt like their stories and relationships weren’t fully explained and were left unresolved so I’m looking forward to seeing what is in store next.

After reading the synopsis, I thought we would start the book right when Beau moves into the house but it actually starts about a month after. So by that point, they’ve established a bit of a relationship, though it is fair from romantic. However, I had a hard time seeing why they liked each other at the start because I didn’t see them build their initial relationship. I definitely started to see it as I continued to read because they actually spend some time together but it took far longer than I expected to get on bored with their relationship.

I’ve opted not to pick up the sequel simply because I’ve been to far removed from this world and its characters.

I appreciated Between Everything and Us more once I finished it because I appreciated the realistic, raw edge it had to it. I just feel like if there was more focus on some plot aspects and less on others, this would have been a great read. If you want a true coming of age new adult read, this is the one you want!

Read if You Like: slower stories, characters in a dark place of mind, realistic romance
Avoid if You: dislike slow stories, want more romance