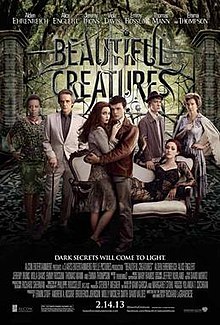 Beautiful Creatures is the start to one of my favourite book series of all time though it isn’t my favourite of the series. However, it is a great start to the series and really sets the stage for the subsequent novels.

It’s a bit of a shock to me that a “witch” book is in my Top 3 favourite series. I usually can’t stand witch/magic novels because I find them a bit boring and the logical, scientific part of my brain struggles with the concept of magic. But this series managed to capture my attention, my heart and my time.

The plot continually builds throughout Beautiful Creatures and finally reaches an awesome climax that sets up the rest of the series. Add to it the great, swoon-worthy romance of Lena and Ethan, their maturity and independence as well as the great cast of characters that surrounds them and this book is a winner.

This book is a lot slower than most books out there so it will take a while to get into. That’s partly because parts of the plot are revealed along the way after we get a feel for the town and partly because it is set in the south and things tend to be slower there.

A great start to an awesome series. It’s truly unlike anything I have ever read before. Well written, great characters and a mysterious, ever-changing plot that sucks you into the world of casters.

I can’t remember where I was in the series when they announced the movie, but I do remember being excited. It always seems like my favourite series aren’t known by the general population and there are always rumours of movie options but never any movie. So when they started announcing the cast, I was getting super excited and trying to find every piece of info that I could get about the film.

So first, I’ll talk about the cast. Alice Englert as Lena was EXACTLY what I pictured when reading the book in every way and watching the movie reaffirmed that fact. But Alden Ehrenreich wasn’t what I pictured for Ethan. He just seemed too old for the role and the movie trailers didn’t really sell me on him. He made me skeptical to watch this movie because we read the book from Ethan’s POV so he is essentially the story and on a personal side, Ethan is probably my favourite character of the series next to Link. However, I have to say that by the end of the movie, Ehrenreich won me over and I thought he did a great job as Ethan. As for the rest of the cast, they were all what I imagined them to be and did a great job.

Now, I understand that movie adaptations are always going to be different from the actual books (they are called “adaptations” for a reason) but I like them to be as close as possible or at the very least have them make changes that I understand and can eventually come to respect. And it’s a bit of a mixed case for this movie.

I can understand the changes they made to Amma and I should have known that there were going to be changes considering Viola Davis was coming off an Oscar nomination at the time she was cast. Nevertheless, I also feel like they shot themselves in the foot if they were ever planning on making a sequel because the changes they made have serious consequences on future plotlines. But it became apparent to me by the end of the movie that they were going in a different direction from the book based on the unfolding of certain events if a sequel was ever in the works.

I was watching this on the airplane on my way back from my trip and my brother was looking over my shoulder. He asked me what I was watching and told me that it looked a little cheesy. And I would have to agree with him, it was cheesy at times but I think that is the fault of the graphics. While the book isn’t particularly dark, it isn’t the lightest book out there and I felt like they shied away from that a bit with the aspects of the book they choose to exclude.

One thing I have to give this movie credit for is capturing the feeling of the book. Despite the many changes, they really left the romance between Ethan and Lena the way it was in the book and it was awesome to see some of the key scenes from the book on the screen between the two of them. Also, I always had the hardest time picturing Macon’s house so seeing it in the movie was an added treat for me!

In this case, the winner is the BOOK. The plot is just so much more intricate in the novel and exciting that there really isn’t a contest. Fans of the book will probably be upset with the plot changes in the movie and rightfully so as it doesn’t do the book justice. However, I give the movie props for visually creating this wonderful world so well.

END_OF_DOCUMENT_TOKEN_TO_BE_REPLACED

There is a novella that takes place between books 2 & 3 called Dream Dark. There are also background story novellas that are to be read AFTER the series: The Mortal Heart.

This is one of my favourite series, which surprises even me when you look that the other series in my top 5–but of course there is an excellent reason why the Caster Chronicles is in my Top 3 Favourite Book Series of all time.

I am not a huge fan of witch-paranormal reads. They tend to bore me and the subject of “magic” and how it is often used bothers me. But with this series I never had that problem. Garcia and Stohl weave a rich and addicting story of magic, family and fate which makes each book impossible to put down. I liked the powers that are revealed and used throughout the series as they logistically make sense and it is easy to understand where, when and how they can and cannot be used.

Another thing is the pacing of the books. The story takes place in the South (and I have to say Garcia and Stohl have captured the South perfectly!) so understandably everything moves a little slower. Normally, this would bother me but I found with Beautiful Creatures (which is definitely the slowest book of the 4) I liked the pacing as it really built up the suspense for the climax and the big reveal. The rest of the series still has the Southern feel to it all, but the pacing is a little faster as more of the plot is revealed.

I also adored the characters of the series. Ethan and Lena were incredibly mature for high school students and I was never annoyed with them. They thought everything through and acted accordingly which I really enjoyed. The rest of the cast, like Link, Ridley and Amma–just to name a few–were absolutely fantastic and I was just as interested in their stories as I was with the main plot.

The series overall has a great plot. Each book builds upon each other as you learn about the various families’ pasts, the Caster World and the characters themselves. One thing I really liked was the fact that there are little clues or hints about what is going to happen along the way so everything connects. But I never found the books to be predictable which was great.

Beautiful Darkness does a great job of not falling into the trap of most sequels despite the fact that it contains many elements that most sequel books have. The plot in book 2 is just as strong, if not stronger, than Beautiful Creatures and I enjoyed book 2 a lot more than the first book.

I have to make a special mention of Beautiful Chaos. This is by far my favourite book of the series because as you read this book you discover how much you love the characters. Perhaps this is a spoiler warning but I balled my eyes out for this book–and I mean full out sobbing, tears running down my cheeks for an hour as I read it. I have only had that happen when reading one other book since (that book, for the curious, is Clockwork Princess by Cassandra Clare of the Infernal Devices Trilogy, #3) but all I can say is I am glad my roommates weren’t home to witness my midnight cry-fest 😉

Beautiful Redemption took me a while to get into. I think part of it was my hesitation to actually finish the series. I have followed it since its start so it was hard to say goodbye to some of my favourite book characters. But the last 150 pages really pick up. I recall being slightly disappointed with the ending (not enough closure for my liking) but overall, it was a great ending to a fantastic series.

UPDATED (May 17/15): I randomly stumbled upon The Mortal Heart on my library’s website and HAD to read it. When this revelation of the past was revealed in the original series, I was floored. It was unexpected and I wanted to know more and this novella is the answer to that. I wish it was a full length novel because it would be such a great story, but in the end this was the perfect length and answered nearly all (what can I say? I’m greedy) my questions. It reminded me how much I love this series and all its layers and I can’t wait to read the other two novellas I think they have planned!

As I said before, one of the best book series I have ever read. If you are looking for a series that is rich in Southern culture, pick this one up. It is unlike any of the other “magic” series out there and has a deep gothic feel that very few books do nowadays and great lead and supporting characters.