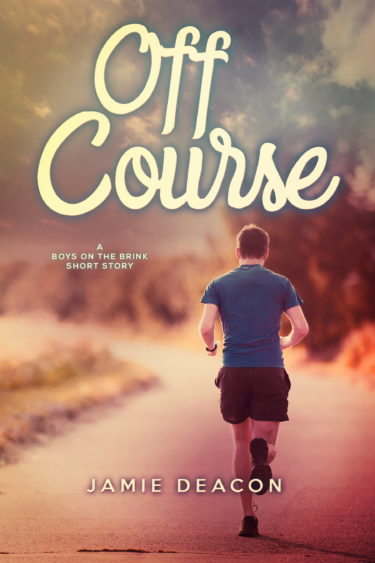 Just over a year ago, I read Jamie’s Defensive Play novella–which is a part of the Boys on the Brink Series–and was immediately charmed by it. It had a sweet, charming romance and had a heartfelt, genuine story to it.

Today, I’m here to share the exciting news that Jamie has added a new title to this fantastic series called Off Course for newsletter subscribers!

He should never have gone running that afternoon—not with the roads so treacherous,
and certainly not without checking his phone was charged. Then again, if there’s one thing seventeen-year-old Jason Connor is famous for, besides being the star of his cross country team, it’s his impulsiveness. So, when an injured ankle leaves him stranded in the woods with no means of calling for aid, it isn’t the first time a rash decision has led him into trouble.

As dusk approaches, Jason believes his situation can’t get any worse…until rescue arrives in the form of Tarek Bahrani—beautiful, infuriating, and the very last person Jason would choose to find him sprawled in the mud. The two have been enemies since clashing at the Brookshire County Championships, but while Taz is a constant reminder of Jason’s biggest mistake, he might just be the only one who can help him put things right.

Born in 1982, Jamie Deacon lives close to the River Thames in Berkshire, England, and
is a full-time author of young adult fiction featuring characters across the gender and
sexuality spectrums. When not writing, Jamie loves to read, play board games, and solve
cryptic crosswords.

Jamie’s debut novel, Caught Inside, was published by Beaten Track in 2016 to much acclaim, including two Rainbow Awards. It was also nominated for a Lambda Literary (Lammy) Award, a Bisexual Book Award, and a Next Generation Indie Book Award.

Don’t forget to subscribe so you can dive right in!

END_OF_DOCUMENT_TOKEN_TO_BE_REPLACED

Not only is the Fixed Series one of my all time favourite contemporary romance series, but it is also one of my most viewed blog posts in the years since. I’m not even kidding! My review of that series is one of my most popular posts year to year since I wrote it in 2014. And rightfully so! I love adore this series with all my heart.

Which is why I am super excited about the latest novel in that instalment! I can’t wait to catch up with all the characters and see what delicious drama Laurelin Paige has in store for us!

You weren’t always perfect. Your past is filled with misdeeds.

Does your wife know all your secrets?

Would she stand behind you if she did?

You think because she’s on bedrest you can protect her? How sweet.

With over 1 million books sold, Laurelin Paige is the NY Times, Wall Street Journal, and USA Today Bestselling Author of the Fixed Trilogy. She’s a sucker for a good romance and gets giddy anytime there’s kissing, much to the embarrassment of her three daughters. Her husband doesn’t seem to complain, however. When she isn’t reading or writing sexy stories, she’s probably singing, watching Game of Thrones and the Walking Dead, or dreaming of Michael Fassbender. She’s also a proud member of Mensa International though she doesn’t do anything with the organization except use it as material for her bio.

I can’t wait to return to the world of Fixed!

What about you? Are you excited?