Which did I read/see first? The Book 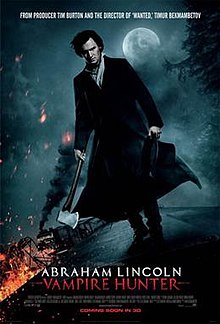 Series: No, it is a stand-alone novel
Genre: Historical, Parody, Action, Vampires

This book had been on my to-read list ever since I read Pride and Prejudice and Zombies by Seth Grahame-Smith (I’m going to refer to it as PPZ hence forth). I absolutely adored that book! It was so well done and I loved how he weaved in Zombies as the cause of the events that transpired in the original book. Needless to say, I was excited to see how he would make an American President a vampire hunter.

Now, I think it is important to state that I am Canadian. I have very little knowledge of past American Presidents or American History. I know the gist of everything but I don’t know all the details–especially with respect to the Civil War and I think that served to my disadvantage with this book.

When I read PPZ, I had just finished the Jane Austen novel so the events of the book were pretty fresh in my mind. I could see why things were happening as they were. However, with ALVH I had difficulty seeing the connections. This book was a lot more focused on the history and Abe’s thought process than the vampire hunting. I was expecting more action and I didn’t get that so I was a little disappointed. I think I skimmed the last few chapters just to finish it.

Readers should be prepared to read how vampires effected the American Civil War instead of reading an action packed Blade-esque vampire hunter story.

I had read the book last summer in anticipation of the movie so I think the movie trailers had distorted my expectations of the novel. Unfortunately, it’s been about a year since I read the novel and I have just finished watching the movie this past weekend so I can’t remember how accurate it is to the novel (sorry!).

The movie was everything I thought it would be: an over-the-top production of Abe Lincoln as a vampire hunter (why would I expect anything else in all honesty?). Because of this, it won’t be everyone’s cup of tea. There is a lot of slow motion action scenes, lots of blood and some bad-ass axe skills. It’s not like a Blade movie by any means, but it had a lot more action than the novel.

In this case, the winner is the movie. It lived up to my expectations–which weren’t that high mind you, but it was what I thought it was going to be.

Synopsis for Abraham Lincoln: Vampire Hunter (from Goodreads):
Indiana, 1818. Moonlight falls through the dense woods that surround a one-room cabin, where a nine-year-old Abraham Lincoln kneels at his suffering mother’s bedside. She’s been stricken with something the old-timers call “Milk Sickness.”

“My baby boy…” she whispers before dying.

Only later will the grieving Abe learn that his mother’s fatal affliction was actually the work of a vampire.

When the truth becomes known to young Lincoln, he writes in his journal, “henceforth my life shall be one of rigorous study and devotion. I shall become a master of mind and body. And this mastery shall have but one purpose…” Gifted with his legendary height, strength, and skill with an ax, Abe sets out on a path of vengeance that will lead him all the way to the White House.

While Abraham Lincoln is widely lauded for saving a Union and freeing millions of slaves, his valiant fight against the forces of the undead has remained in the shadows for hundreds of years. That is, until Seth Grahame-Smith stumbled upon The Secret Journal of Abraham Lincoln, and became the first living person to lay eyes on it in more than 140 years.

Using the journal as his guide and writing in the grand biographical style of Doris Kearns Goodwin and David McCullough, Seth has reconstructed the true life story of our greatest president for the first time-all while revealing the hidden history behind the Civil War and uncovering the role vampires played in the birth, growth, and near-death of our nation.