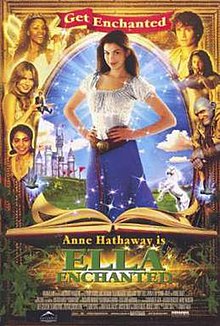 I wanted to read this book ever since I watched the movie and so, two years after the movie was released I grabbed my local library’s copy and got cracking!

It took me awhile to get into this book. I believe this was caused by two things: 1)I was expecting it to be like the movie and 2) I was probably a little too old to be reading it.

I’ll tackle #1 first. As we all know, movie scripts often take liberties in order to condense a book into a 90 minute film and that is the case here. While the basics are the same in the movie, there is a drastically different plot in the book (it is more of a Cinderella retelling with a twist than in the movie) and that wasn’t what I was expecting.

Which leads me into #2, I was a little too old to read this. This book is definitely geared towards the younger teen crowd. The writing is great, but the plot and setting is definitely “middle school” in its approach and just didn’t appeal to me enough.

I was disappointed in this book, but I know that if I read it before the movie came out, I would have loved it. Great story and message, just not my cup of tea when I read it.

I can remember finishing this movie and wanting to watch it again. I just thought it was such a cute story and I loved every minute of it. And my feelings on this have nothing to do with my huge crush on Hugh Dancy 😉

There were quite a few things I enjoyed besides the casting. I liked the story and the characters–it was a fun, funny, fantasy adventure that I hadn’t seen a lot of lately in the teen romantic comedy movies of the time. I also liked the modern yet medieval approach to the world (like the escalator in the market or the paparazzi). I thought it was a neat twist. Mind you, I was also 12 when I watched this for the first time so I was the target audience but if it is on the TV, I can’t help but to watch it — this probably has everything to do with my crush on Hugh Dancy 😉

After reading the book, I think I would have been severely disappointed in the movie. They weren’t alike as I mentioned before, although I still think it kept true to the message of the book–girls have the strength to do whatever they set their mind to. I think the movie was geared to appeal to a larger age range and for that to happen that had to change the story to get it there.

In this case, the winner is MOVIE . This is definitely a personal opinion and one I think would be the reverse if I had read the novel before I watched the movie. Both are entertaining in their own way–it is just one of those cases where it depends on your age and what you see/read first.

Synopsis for Ella Enchanted (from Goodreads):
At birth, Ella is inadvertently cursed by an imprudent young fairy named Lucinda, who bestows on her the “gift” of obedience. Anything anyone tells her to do, Ella must obey. Another girl might have been cowed by this affliction, but not feisty Ella: “Instead of making me docile, Lucinda’s curse made a rebel of me. Or perhaps I was that way naturally.” When her beloved mother dies, leaving her in the care of a mostly absent and avaricious father, and later, a loathsome stepmother and two treacherous stepsisters, Ella’s life and well-being seem to be in grave peril. But her intelligence and saucy nature keep her in good stead as she sets out on a quest for freedom and self-discovery as she tries to track down Lucinda to undo the curse, fending off ogres, befriending elves, and falling in love with a prince along the way. Yes, there is a pumpkin coach, a glass slipper, and a happily ever after, but this is the most remarkable, delightful, and profound version of Cinderella you’ll ever read.