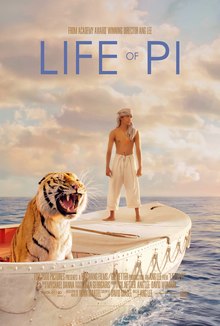 I count this book as one of three that I truly enjoyed reading in high school (the other two are Interview with a Vampire and the Secret Life of Bees). There is just something about it that makes you appreciate and look at life in a different way.

While the book does discuss religion (which can sometimes be touchy for people) I find it doesn’t do so in an “in-your-face” way. Nothing about this book is done to push buttons; rather it gets your mind thinking about how you view life.

The story is really about a man sharing his philosophy on life and why he feels that way. It’s humourous at times, heartfelt, refreshing and adventurous. I easily read this in a day (also because I had to for school) but it was never a chore to do so.

I’ve recommended this book to a variety of people who have all enjoyed it and I know when I talk to people from high school, they all say that they enjoyed reading this book! Highly recommended!

I saw this movie quite a bit after it came out but that didn’t stop me from enjoying it, even if it was a late show. I was skeptical going into this movie because I really wasn’t sure how they were going to pull it off. Most of the book takes place on a boat with a tiger and that doesn’t give you a whole lot to work with–but Ang Lee does a fantastic job and in my opinion totally deserves the Oscar he receives for directing this piece.

Seeing it in 3D added an extra dimension to this movie (no pun intended). It just made everything come to life in a way that is so visually stunning and a pleasure to watch. The CGI graphics are phenomenal and it is almost impossible to differentiate between the real tiger and the fake tiger they used in filming.

Suraj Sharma does a great job as Pi. He is everything I pictured as I read and he carries this movie easily.

One thing that I felt lacking from the movie were the bits from the book about Pi’s spirituality. I understand why they toned it down and avoided it slightly in the movie to appeal to the masses but I felt like it was an integral part of the novel. Instead, the movie focuses more on Pi’s journey in finding himself while stranded and reflecting on his life. But overall, I really enjoyed the movie plot and I didn’t find it boring despite a slower based plotline.

In this case, the winner is the book. This is a really tough call for me because I really did love the movie but the book was just so rich and unlike anything I have ever read so I have to give it to the book.

Synopsis for Life of Pi (from Goodreads):
Life of Pi is a fantasy adventure novel by Yann Martel published in 2001. The protagonist, Piscine Molitor “Pi” Patel, a Tamil boy from Pondicherry, explores issues of spirituality and practicality from an early age. He survives 227 days after a shipwreck while stranded on a boat in the Pacific Ocean with a Bengal tiger named Richard Parker.