Which did I read/see first? Books 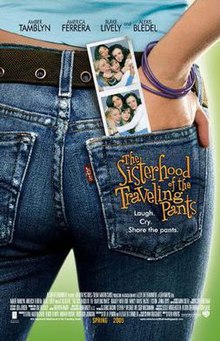 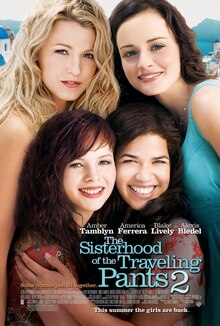 The Sisterhood of the Travelling Pants series is one of the first Young Adult series I ever read and I credit it with my reading addiction. While they are definite chick lit books, they really do have good messages about friendship and family.

The books have a lot going on because you are essentially reading 4 different girls stories that are linked by them being all friends. Nowadays you would probably get a single book for each girl but I like how they are all combined together. I always found that there was some plotline that was my favourite in each story that made me keep reading even if I wasn’t a fan of one girl’s plotline.

These books are a lot of fun but also have some more serious moments to them. Young adult chick-lit fans will love these books without a doubt!

I decided to combine book movies into one review instead of making them separate. The first movie, The Sisterhood of the Travelling Pants, is only based on the first book of the series; however the sequel movie combines books 2-4 together with the main focus being on book 4, Forever in Blue.

So, I’ll start with the first movie. I thought it was really well done and I really enjoyed it. The casting was spot on, though I’m not the biggest Alexis Bledel fan so I didn’t overly like her as Lena. But other than that, the rest of the cast was great and even if I don’t like Alexis, she is exactly what I pictured Lena to look like. It captured the heart of the book very well and it was cool to see a favourite book series come to life on the big screen.

I was really surprised when the second movie was announced because my understanding was that the first one didn’t do crazy well at the box office. Regardless, I was super excited to watch it. Again, the cast was great and I had no problems there. Knowing that they were combining the next 3 books into one movie, I think they did a good job. It’s hard to do and I know that things had to get cut but I think they blending everything well. I totally thought that they changed the ending but based on what I read on Wikipedia, I am wrong there 😛

In this case, the winner is the BOOKS. While the movies do a good job at capturing the feel of the books, I like the full plotlines we get in the books though I don’t think fans of the books will be disappointed in the movies.

Synopsis for Sisterhood of the Travelling Pants (from Goodreads):
Carmen got the jeans at a thrift shop. They didn’t look all that great: they were worn, dirty, and speckled with bleach. On the night before she and her friends part for the summer, Carmen decides to toss them. But Tibby says they’re great. She’d love to have them. Lena and Bridget also think they’re fabulous. Lena decides that they should all try them on. Whoever they fit best will get them. Nobody knows why, but the pants fit everyone perfectly. Even Carmen (who never thinks she looks good in anything) thinks she looks good in the pants. Over a few bags of cheese puffs, they decide to form a sisterhood and take the vow of the Sisterhood of the Traveling Pants . . . the next morning, they say good-bye. And then the journey of the pants — and the most memorable summer of their lives — begins.

Trailer for Sisterhood of the Traveling Pants: