One of my new resolutions for 2015 in terms of my blog to is to actually do something about the awards I have been nominated for by some awesome bloggers. I always read the comments and smile that someone has taken the time to nominate me for something but I always forget to complete the necessary parts of the award. So, I would like to apologize for the very late response to each and every one of you! It truly means a lot to me that you have nominated me for an award and I feel awful that I ignored your kindness until now. This year I am going to try and change that by completing these nominations over the next month! 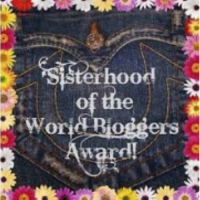 Thank you to Book Junkiez for the nomination for The Sisterhood of the World Bloggers Award. You have nominated me for so many awards and I truly thank you for following my blog! I wish you all the best with your blog in the future!

My Answers to the Questions:

1. Where is your favorite place to read?

2. If you could meet any author, who would that be?

J.R.R.Tolkien. I would love to pick his brain about his writing process and Middle Earth.

3. If you were stranded on a deserted island, what 2 books would you like to have with you?

The Book of Awesome to keep my positive. And a book that would help me escape 😛 Haha no in all seriousness, I would pick the Perks of Being a Wallflower because it’s my favourite novel and makes me laugh.

4. Where is your favorite place to take a vacation?

5. Why did you start blogging?

I started with posting reviews on Goodreads and realized that a blog that focused on series reviews was needed. The idea actually occurred to me after finishing Lauren Oliver’s Delirium Series. This was a series that started out alright, lulled and then completely dropped the ball in the final book. If I had known that the ending would have left me completely unsatisfied I would have never picked up the series*. But I thought to myself: I wish someone had written a review of the whole series to tell me how awful it became*, because if they had, I would have never picked up the series in the first place. Three other factors pushed me: the fact that I hate spoilers in my reviews (and lots of people write reviews where they summary the entire book; especially on Goodreads); I was tired of reading reviews filled with gifs and pictures (again, extremely common on Goodreads); and I felt that there was a need to have book mini synopses for series that had long publication times between books. That last one especially because I got to the point in my reading where I was reading so many books throughout a year that I would forget what happened in the previous book. So I ended up starting a word doc where I summarized the key plot points of each previous book to jog my memory before I started the next one.

*To be fair to the Delirium Series, I started it as soon as the books were published and subsequently followed the series as it was published so there was no way someone could have told me how unsatisfying the finale would be.

6. What is your favorite thing about blogging?

Writing reviews, especially about new series, reminds me of how I was feeling when I read those books and I often reread my posts before starting that series’ sequels or starting another series by that author. It makes a nice reference point for me personally because I have such an awful memory and I read so many books that they all blur together.

7 . Who influenced you the most growing up?

My parents and my family, for sure. Also Walter Disney (might seem like an odd choice but I love the vision he had for the Walt Disney Company and everything that has transpired from such an idea).

8) What was your favorite book as a child?

The only novel I really remember rereading was Jayden’s Rescue by Vladimir Tumanov. I also read a lot of Franklin, Arthur and Hopper books as a kid so those are on my list too.

9) Do you have a preferred genre that you like to read?

10) If you could be any character from a book, who would you be?

Magnus Bane from the Mortal Instrument Series because he seems like he has such an interesting life. Plus he has some pretty kick ass magic that might come in handy.

1. Provide a link and thank the blogger who nominated you for this award.
2. Answer a few questions about yourself.
3. Nominate 10-12 blogs that you find a joy to read.
4. Provide links to these nominated blogs and let the recipients know that they have been nominated.
5. Include the award logo within your blog post.