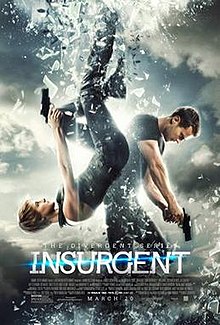 Trying to follow-up from the awesomeness that is Divergent is a huge task and one I felt Insurgent didn’t meet. You know, I hardly remember anything about this book except how it ends because that ending shocked me completely and made me excited to read Allegiant.

It’s weird because things definitely happened throughout Insurgent. We are never in the same place for very long and there are various twists along the way that set-up great things in the future. So maybe that is where this book fails: building up for future events and not paying enough attention to its own plot. It’s the curse of the middle book in a trilogy and it’s a shame that Insurgent had to fall prey to it.

As I said in my series review of the trilogy, Insurgent lacks a lot of action; especially when compared to Divergent. So I think in that respect that was why I found it to be a little slower.

Looking back at my GoodReads ranking of Insurgent, I see that I gave it a 5. And I definitely know why I did: because it set things up perfectly for the last book with that ending. So the ending is definitely a 5/5 but I’d give the book a 4/5. (Also, I read this like 3 years ago so I guess it’s normal to forget what happened)

Were my Expectations Met?

So I was expecting this movie to be a lot faster paced than I remembered the book to be and it definitely was! I found Insurgent never really had a dull moment and it kept my full attention. Seeing all the simulation aspects come to life was really cool and I thought it was well done. There were some cheesy moments and two weird camera shots but all in all, I thought it captured the essence of the series well.

After my quick Wikipedia look at the what happened in the book, I realized they changed a lot. Some things were minor (like Tori’s brother) and I think that change was for the best. Like I said, I felt like the book had too much going on and the movie simplified it to some extent.

However, they changed the ending and that really pissed me off. OK, to be fair, it’s just one little detail but it was truly the best part of the ending to me when I read the book. So I left the movie pretty upset that they changed it.

I also like that the relationship between Tris and Four isn’t so wishy-washy. They really present a united front more-so in the movie than they do in the book–which was great because they are one of my favourite literary couples to read/watch.

HELL YES! Man, the casting in this movie is fantastic! I know some people don’t like Shailene Woodley but I thought she did a great job as Tris, just like she did in the first movie. I really don’t need to say how great Theo James is as Four–and I’m not talking about his looks…much. No, in all seriousness, he is exactly how I wanted Four to be in all aspects of the character.

Like most people, I developed a huge crush on Ansel Elgort after he starred in The Fault in Our Stars. But even he couldn’t save me from hating Caleb–so job well done Ansel 😉 And Miles Teller–where have you been all my life! If you had asked me if I would have liked Peter EVER, I would have flat out said “no”. But Miles really presented a Peter that was charming and fun and he was one of the best parts of the movie to me.

What Am I Expecting Next?

While I think splitting up Allegiant into two movies is a very, very stupid idea (it was by-far the dullest of all the books) and only see it as a money grab: I am slightly excited to see where they take it. A lot of the plot changes they made really leave the world beyond the wall a huge mystery and I’m honestly not sure what direction they are going to take it.

I fear that it is going to be another Mocking Jay Part 1 scenario where we get a whole lot of talking and not so much doing. *sigh*

In this case, the winner is the MOVIE? You know, I really don’t know what to pick! In some ways, I like the faster pace of the movie a lot more than the book but to be fair to the book, it’s been sooooo long since I read it. For now, I’m going to say the movie and if I ever reread the series, I’ll reevaluate this 😉

Synopsis for Insurgent (from Goodreads):

One choice can transform you—or it can destroy you. But every choice has consequences, and as unrest surges in the factions all around her, Tris Prior must continue trying to save those she loves—and herself—while grappling with haunting questions of grief and forgiveness, identity and loyalty, politics and love.

Tris’s initiation day should have been marked by celebration and victory with her chosen faction; instead, the day ended with unspeakable horrors. War now looms as conflict between the factions and their ideologies grows. And in times of war, sides must be chosen, secrets will emerge, and choices will become even more irrevocable—and even more powerful. Transformed by her own decisions but also by haunting grief and guilt, radical new discoveries, and shifting relationships, Tris must fully embrace her Divergence, even if she does not know what she may lose by doing so