Movie Mondays: On the occasional Monday, I will review a book series or novel that has been made into a movie. I will then answer the question that everyone asks: which is better, the movie or the book? Here is this week’s offering + my Everything YA April Mini-Challenge Pick: 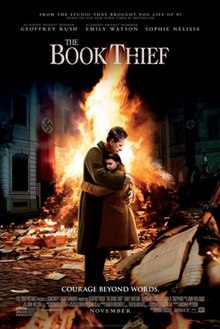 What I was expecting/Why I picked it up:

The Book Thief has been on my TBR for a very long time thanks to numerous friends recommending it to me. But it moved up on my list after the movie was released and I saw it listed on Netflix. Then I needed a book-to-movie-adaptation for my April Everything YA Challenge plus a WWII book for my Bookish Bingo: Ready for Spring 2015 Card and this book fit the match perfectly!

I’ll be honest: I really didn’t know what to expect from this book other than it was going to make me sad. The only YA WWII book I’ve read is Violins of Autumn where the lead becomes a spy, so this was a completely different side of the war I hadn’t read about before so I was looking forward to it.

I really liked how this book was written. I love how it was set up almost like a play where you get little spinets for each part and then get each scene. It kept things interesting and despite its long length, it moved at is surprisingly faster pace–at least for the first half.

I also loved Death’s narration and takes on things! He was surprisingly humorous in some cases–albeit darker humour–but I laughed a few times reading this which surprised me.

I won’t lie: sometimes I had a hard time understanding what was happening because of the narration style. Sometimes I found it to be very vague and because I was only reading parts at a time, I found it hard to keep track of characters and what was actually happening. It also jumps around a bit with foreshadowing and scenes from the past.

I also thought this book was too long. I like more actions to my novels–and I feel awful saying this because it takes place during a war which is not a happy setting–it was a little too monotonous for me. While I appreciate how it captures the daily life of families in Germany during WWII, I felt like to took the plot a long time to move forward. It became a little tedious to read. It could have been half the length it was and I still would have been satisfied with the book–probably even more so! It reminded me a lot of To Kill a Mockingbird in that sense–but instead of the second half being about Tom Robinson’s trial, The Book Thief is like the first half of the book where you read about Scout’s everyday life as a kid.

I can appreciate that this book is extremely well done and does a fantastic job capturing what it was like for German youth during WWII–it just isn’t my particular cup of tea so I didn’t enjoy it as much as I had hoped. It’s slower in it’s pace and was far to long for me to fully enjoy.

I was really looking forward to this movie when I was only a few pages into the book. I think I knew as soon as I started reading that I was going to enjoy the movie a lot more than I did the book.

I enjoyed the major plotlines of the book but I could have done without the repetitiveness of everyday life and some events. So I knew/expected the movie to focus on the big stuff and not so much on the small stuff which is what I wanted.

And it really did! I was much more emotional watching the movie than when I was reading book. I think it was because I could actually see the events unfolding before my eyes. Reading about the events of WWII is one thing but actually witnessing the horrors is another; even if it is just a reenactment. I also think some scenes were so bittersweet because I knew what was going to happen to some of these characters.

I would say it is very close to the book. The major events of the story are almost identical in the movie. There are a few little changes and some minor scenes have been added, but they stay true to the idea/theme of the book so I really didn’t mind.

Am I the only one who sees Geoffrey Rush as Captain Barbarossa in everything that he does now? Even without the eyeliner and the large hat, he is still the Captain to me. However, I thought he did a great job as Papa.

The rest of the cast was exceptional! While they subdued the role of Death, Roger Allam had the perfect tone when he was speaking. Sophie Nélisse did a great job as Liesel and Nico Liersch as Rudy was simply adorable.

While both are exceptional pieces of works in their own rights, I much preferred the condensed version of the movie. I thought it captured the essence of the book but was a lot easier to follow and more captivating.

Synopsis for The Book Thief (from Goodreads):
HERE IS A SMALL FACT – YOU ARE GOING TO DIE

1939. Nazi Germany. The country is holding its breath. Death has never been busier.

Liesel, a nine-year-old girl, is living with a foster family on Himmel Street. Her parents have been taken away to a concentration camp. Liesel steals books. This is her story and the story of the inhabitants of her street when the bombs begin to fall.

SOME IMPORTANT INFORMATION – THIS NOVEL IS NARRATED BY DEATH

It’s a small story, about:

and quite a lot of thievery.