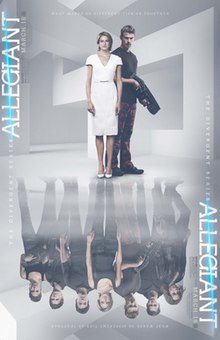 There are a bunch of short stories told from Tobias’ perspective. See the list here.

I honestly don’t remember much about this book other than that I was disappointing in it (but I did give it 5 stars so who knows what I was thinking all those years ago) and I was shocked by the ending.

I remember that this book was a lot of talking and I didn’t totally expect that. Given how action packed the first two books were, I should have. But it went the way of The Mockingjay in the sense that this is the book of explanations; where you finally learn what has been plaguing this world.

Unlike some people in the world, I did enjoy having Four’s POV as alternating chapters. After Insurgent, I think this is just as much Four’s story as it is Tris’. It was refreshing to me and I really don’t think you could have told the story of Allegiant without it. They are one of my favourite literary couples and I welcomed the insight into both of their characters through the alternating POVs.

This is one of those books I think you appreciate more after you’ve had a chance to digest everything that has happened. It was slower but really built up for a climax completely worthy of this series.

After the way Insurgent ended, I really didn’t know what to expect in this movie. I don’t remember this book being too action packed so I was expecting it to be on the duller side. I also wasn’t sure what plot lines they would keep and elaborate on.

As a whole, this movie was more exciting than I thought. Not as fun as Divergent but it still kept moving. I think Theo James as Four is responsible for that. His story was definitely more exciting than the one Tris has but I think it was that way in the book too. It was good but nothing mind-blowing either.

I immediately Wiki’d the book for the full synopsis to see how close it was. They changed a lot but I think some of the changes were for the best. In the movie, the world outside the wall is really unknown whereas in the book they have inklings of what is maybe out there. I like the spin they have on the experiment, though I still think the way the original Insurgent novel ended has more impact than the what they did in this movie when it comes to Tris’ mom (In the book, it is Tris’ mom who reveals the truth about their Chicago, not a generic person).

I thought the idea of the Fringe was interesting and I like the more Science Fiction vibe the story has in the movie. It felt simpler to me albeit predictable.

It’s been so long since I read the book so I don’t remember how I felt about the characters. I’ve always liked Tris but she seemed a little lacklustre in this movie and I didn’t like that. She wasn’t the strong heroine I always remembered her to be but I might have felt that way reading the books…I should really reread this series.

I still love the cast! They are all so great! Ansel Elgort makes it so hard to hate Caleb and Miles Teller as Peter is phenomenal. I loved every moment that he was on screen as Peter (and I never thought I would say those words).

Theo James really stole the show for me in this one. It didn’t hurt that he had a more action-packed story line but Four is such a badass that it was so much fun to watch him.

I always thought it was a super stupid idea to split this book up into two parts–and after watching it I have to say that I still stand by that stance. I honestly don’t know if they are going to keep the original ending of the books given the events they kept and modified in this one. I really hope they do but I get the feeling they won’t and that is really upsetting.

After the movie, I would have said it won but it seems a little forgettable now that I write this. It’s also been so long since I read the book! When I think about it now, I remember it being bored yet I gave it a 5/5 right after reading it so what do I know?!

Synopsis for Allegiant (from Goodreads):

The faction-based society that Tris Prior once believed in is shattered – fractured by violence and power struggles and scarred by loss and betrayal. So when offered a chance to explore the world past the limits she’s known, Tris is ready. Perhaps beyond the fence, she and Tobias will find a simple new life together, free from complicated lies, tangled loyalties, and painful memories.

But Tris’s new reality is even more alarming than the one she left behind. Old discoveries are quickly rendered meaningliess. Explosive new truths change the hearts of those she loves. And once again, Tris must battle to comprehend to complexities of human nature – and of herself – while facing impossible choices about courage, allegiance, sacrifice, and love.