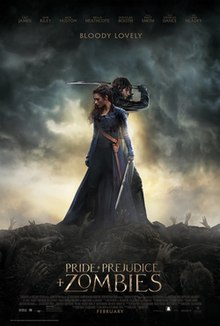 I had just finished Pride and Prejudice (PP) when I picked up this zombified version. I’ll admit, I was more interested in this horror version than the classic simply because I had heard really good things about it. But I wanted to be familiar with the original story (not just what I watched in movies) and so it served as good motivation to pick up the classic novel.

The two books are very, very similar. The best way I can think to describe Pride and Prejudice and Zombies (PPZ) is PP with new scenes added to include the zombie aspect. Of course, certain things are reworked to account for the fact that all the Bennet girls are warriors but lots of scenes are word-for-word the Austen writings–which is why she is listed as an author on this novel.

As a girl who likes action in her stories, the zombie slaying battles were a lot of fun to read. It (ironically) adds a little life to the story and makes such a well known story fresh and exciting. Not that PP isn’t great on its own, it’s just cool to see a different spin on a story we know so well.

And dare I say, it actually made me really like the Elizabeth and Darcy pairing even more. Their love-hate relationship really works well for this zombie version. You could see why they liked each other so much and how great of a pair they were for each other.

I think fans of the classic novel will enjoy this fun take if they don’t mind zombies. I also think it will appeal to people who want to read the classic but might find it on the drier side. It serves as a great introduction to the classics of Jane Austen and will hopefully ignite a love for her work.

First, it took me wayyyy too long to watch it! I wanted to see it opening weekend but it wasn’t playing in my local theatre on my Reading Week break and by the time I got back to a bigger city a week later, it was gone! So I had to wait forever to get my hands on a copy!

I just wanted to have fun watching this movie and I definitely did! While I love the other PP movies, this one lacked the more sombre and seriousness of those presentations. This one exaggerated characters more (like Mr Collins) and had great action sequences so it moves at a fast and exciting pace.

All the Bennet girls kicked serious ass; especially Lizzie. She’s still that strong and stubborn heroine who doesn’t give up a fight–only in this case it is literally!

I read the book ages ago so I’m not sure how close it truly was. While I know the PP classic story very well, I don’t really recall all the action and zombie scenes all that much. But everything seemed to be the same to me or if it was different, it was all in the same vein so I truly didn’t notice.

I’m a huge Lily James fan. Don’t ask me why exactly; I think she just does a great job at playing strong heroines. I know that Natalie Portman was originally tapped to play Lizzie but I think Lily was the much better choice.

Sam Riley will never be Collin Firth’s Darcy in my eyes (the standard for all Mr Darcy’s past and future), but he really did a fantastic job. He’s got the whole stiff and proper vibe going on and it works.

But you know who really stole this one for me? Was Matt Smith as Mr Collins. He was just hilarious! His character adds a lot of humour to this story which can be pretty depressing at times (I mean, they are killing undead people they sometimes know). In other adaptations, I always feel sympathetic to Mr Collins and how he gets tossed aside as a husband; but here he is the Shakespearean fool and it makes it easy to see why he isn’t that much of a catch.

I think we can all agree that the original novel by Austen is the real winner. I mean it’s a classic that is adored by generations and is one of the most well known romances in history.

But I think it depends on what you want when it comes to PPZ and its forms. The book rings more true to the classic novel simply because it shares a lot of the same passages. So if you want a retelling, perhaps the book is your pick. But if you want to be entertained with a loose adaptation, the movie is just a lot of fun. It has the action and it has the romance and it’s simply a joy to watch.

Synopsis for Pride and Prejudice and Zombies (from Goodreads):

So begins Pride and Prejudice and Zombies, an expanded edition of the beloved Jane Austen novel featuring all-new scenes of bone-crunching zombie mayhem. As our story opens, a mysterious plague has fallen upon the quiet English village of Meryton—and the dead are returning to life! Feisty heroine Elizabeth Bennet is determined to wipe out the zombie menace, but she’s soon distracted by the arrival of the haughty and arrogant Mr. Darcy. What ensues is a delightful comedy of manners with plenty of civilized sparring between the two young lovers—and even more violent sparring on the blood-soaked battlefield. Can Elizabeth vanquish the spawn of Satan? And overcome the social prejudices of the class-conscious landed gentry? Complete with romance, heartbreak, swordfights, cannibalism, and thousands of rotting corpses, Pride and Prejudice and Zombies transforms a masterpiece of world literature into something you’d actually want to read.