Single Sundays: Paddle Your Own Canoe by Nick Offerman

Single Sundays: While this blog may be focused on reviewing book series as a whole, we can’t forget about the good ole’ standalone novel! On Sundays, I will review a novel that is considered to be a standalone novel. Here is this week’s offering:

Synopsis for Paddle Your Own Canoe: One Man’s Fundamentals for Delicious Living (from Goodreads):
Parks and Recreation actor Nick Offerman shares his humorous fulminations on life, manliness, meat, and much more in his first book.

Growing a perfect moustache, grilling red meat, wooing a woman—who better to deliver this tutelage than the always charming, always manly Nick Offerman, best known as Parks and Recreation’s Ron Swanson? Combining his trademark comic voice and very real expertise in woodworking—he runs his own woodshop—Paddle Your Own Canoe features tales from Offerman’s childhood in small-town Minooka, Illinois—“I grew up literally in the middle of a cornfield”—to his theater days in Chicago, beginnings as a carpenter/actor and the hilarious and magnificent seduction of his now-wife Megan Mullally. It also offers hard-bitten battle strategies in the arenas of manliness, love, style, religion, woodworking, and outdoor recreation, among many other savory entrees.

A mix of amusing anecdotes, opinionated lessons and rants, sprinkled with offbeat gaiety, Paddle Your Own Canoe will not only tickle readers pink but may also rouse them to put down their smart phones, study a few sycamore leaves, and maybe even hand craft (and paddle) their own canoes.

My first exposure to Nick Offerman was as the enigma of Ron Swanson on the fanastic TV comedy Parks and Rec. So I am going to apologize in advance for the many gifs that I’ve added to this review.

Ron Swanson is one of my all time favourite TV characters and because of that, I love Nick Offerman. I don’t like to be that person who equates an actor to be the same person they play in a TV show but I have a feeling Nick and Ron share a lot of commonalities and view points. What those were exactly had me excited to listen to this audiobook. No way was I going to miss out on Nick Offerman’s verbal humour by reading the novel via paper!

Like most celebrity memoirs, this novel is a mix of life stories and life philosophies. It isn’t anything new or unexpected on that front. 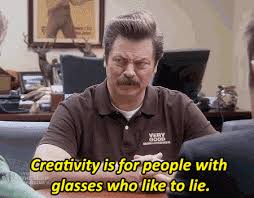 The Writing / The Narration:

I love the way Nick Offerman delivers his sarcasm and wit. He’s a funny guy but also very intelligent. Like his character of Ron, he often delivers these unexpected nuggets of wisdom that just make you think.

However, I did find this novel excessively long. The audio version is close to 10 hours in length and I don’t want to listen to anyone for that long. 5 hours is my max for a memoir.

I really liked how Nick reminds people to keep it simple in life. He’s blunt and straight-forward and I appreciated that a lot.

While this was wayyyy too long for me, I did enjoy it. It definitely had its funny moments and it was exactly what I thought it was going to be. But if you don’t know who Nick Offerman is or enjoy celebrity memoirs, this most definitely isn’t for you. As Ron says:

Read if You Like: Parks and Rec, celebrity memoirs
Avoid if You: dislike long memoirs