Movie Mondays: I Am Malala by Malala Yousafzai 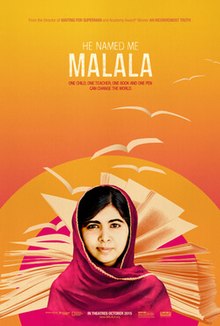 I didn’t know much about Malala other than what the title of her book says. But I was curious to learn more.

I thought this book would be more about her life after she was shot–but in hindsight I’m not sure why. I mean, you have to learn why she is shot in the first place, but I guess I just didn’t expect so much history. However, it is the best aspect of the story.

I learned a LOT about the history and political turmoil of Pakistan. I only know the gists from headlines back in Canada–but it always has a foreign spin to it and not the native context that this book provides.

So you learn about Malala’s life all the way up to the moment she is shot and the events that follow after. It’s quite detailed but well informed and doesn’t bombard you with information you can’t retain.

This might sound bad, but I was worried that Malala would be portrayed in a “perfect” light. What I mean is that, I worried she would only focus on her activism and trimuphs. But that isn’t the case at all. She has no qualms sharing her faults (like her quarrels with friends, etc) and I greatly appreciate that. It grounds her and provides a realism to this story that adds to its message.

You might think Malala narrates this entire audiobook but she doesn’t. She just narrates the prologue and another woman narrates the rest of the book. And honestly, it is just as heartbreaking and inspiring to read even when you know Malala isn’t the one speaking to you.

This book broke my heart and made me feel extremely guilty for taking for granted the many privileges and rights I have everyday in my life.

Here I am, a girl complaining about being in her 6th year of post-secondary studies and here is this girl telling me girls in her country are denied the chance to attend any school in their lifetime.

Here in North America we are fighting for equal pay for the genders while there are some countries that don’t allow women to work at all.

This book really opened my eyes to the injustices of the world–especially those against females–and I will be forever grateful.

Heartbreaking but inspiring, this is a fantastic read for anyone interested in how one girl draws attention to an issue faced my millions around the world.

I went into this movie/documentary hoping that this movie would focus more on Malala after the shooting and her work afterwards; only briefly touching on her life in Pakistan.

And that’s what we get.

At times, the movie feels like an extended epilogue to the memoir. You get to see how far she has come from her injuries and how that hasn’t slowed her down in any way. It’s inspiring in a whole other way.

The movie definitely glosses over the finer details of the turmoil in Pakistan, just giving the viewer enough information to give context to Malala’s circumstances. Some scenes are right from the book though.

And like I said above, I feel like this movie is shows you more of what happens after her recovery and what her life is currently like. It also gives you the global perspective of the reception around the world.

But it still does a great job of showcasing Malala as an everyday girl who wants girls all over the world to be seen as equal to boys.

I think the book and the movie should be paired up. That when you finish one, you read/watch the other. If you don’t want to read the book and get the details of the current situation in Pakistan, the movie is a great crash-course in understanding the basics. They are both interesting and inspiring works that girls (and boys!) should experience because we still have a long way to go when it comes to equality around the world.

Synopsis for I Am Malala: The Story of the Girl Who Stood Up for Education and Was Shot by the Taliban (from Goodreads):

I come from a country that was created at midnight. When I almost died it was just after midday.

When the Taliban took control of the Swat Valley in Pakistan, one girl spoke out. Malala Yousafzai refused to be silenced and fought for her right to an education.

On Tuesday, October 9, 2012, when she was fifteen, she almost paid the ultimate price. She was shot in the head at point-blank range while riding the bus home from school, and few expected her to survive.

Instead, Malala’s miraculous recovery has taken her on an extraordinary journey from a remote valley in northern Pakistan to the halls of the United Nations in New York. At sixteen, she has become a global symbol of peaceful protest and the youngest-ever Nobel Peace Prize laureate.

I Am Malala is the remarkable tale of a family uprooted by global terrorism, of the fight for girls’ education, of a father who, himself a school owner, championed and encouraged his daughter to write and attend school, and of brave parents who have a fierce love for their daughter in a society that prizes sons.