Movie Mondays: Before I Fall 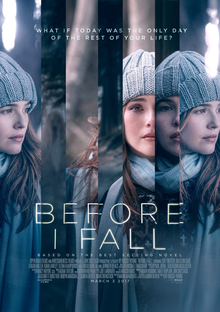 Before I Fall has been on my TBR list before I even knew what “TBR” meant. It graced every teen “must read list” in 2010 and I’ll admit, it grabbed my attention. But the holds list was super long and it slipped my mind. And then I read her Delirium Series–the inspiration for this blog–and really didn’t like it. So I was hesitant to pick up another Oliver title.

I went into this book with a fresh mind but it was hard.

Sam is everything I detest in a YA contemporary heroine. She’s self-absorbed, lost in her own world and just not that nice of a person. But that’s the whole point of this novel isn’t it? Sam is supposed to learn some life changing lesson and become a better person because of it.

And that happens to a certain extent. She definitely learns some valuable lessons but I’m not sure if I like the motivation for it. For me, Sam never escapes the persona of a selfish girl. Her desire to change comes across as someone who needs to fix things in order to redeem herself as a “nice person”. I guess it just didn’t come across as selfless to me.

As for the novel itself, it wasn’t as repetitive as I expected. Oliver does a good job of not rehashing every moment of every day. She also does a decent job of leading you on a bit of a mystery. Trying to figure out how everything links together kept me interest.

I’ll be honest, I rushed through this book a lot because I had to return it so my experience wasn’t everything it could have been. In the end, I had a hard time liking Sam and that really did colour my impressions of this novel as a whole.

Considering I wasn’t a huge fan of the novel, I wasn’t really sure how I would enjoy the movie. If I couldn’t stand Sam and her friends just by reading about them, how would I feel was I watched them be awful teenaged girls?

But the movie is really well done. Like the book, you aren’t rewatching scene after scene of the same day. I suppose that is the beauty of films and their ability to have montages 😉

And I will admit, watching Sam’s story here made me slightly more emotional (in a good way) as opposed to the novel where my feelings were more annoyed than empathetic.

From what I remember of the book, this was pretty close. And what I think they left out (like the scene with Sam’s teacher, etc.) made the story stronger here. But the root of the story and its message are the same.

I will say, that Sam’s self-realization in the movie seemed a touch more natural to me. I don’t know if that is because you don’t have her internal monologue for the entire story and you only see what is on the surface/what is said. Or perhaps it is because you have a person you can visually see reacting to everything that helps you empathize. However, I still really struggle with the ending overall.

The first role I saw Zoey Deutch (Sam) was the TV show The Ringer where she played a similar character to Sam. She’s a great actress who can play more than just a bitchy teenager (she was great as Rose in The Vampire Academy Movie) so I thought she was a great choice for Sam. Like I said above, I really didn’t like Sam in the book but Zoey brought a touch of humanity to Sam here.

The rest of the cast was great as well. I don’t know if I would change anything about the cast.

I definitely enjoyed the movie a touch more than the novel. I think not getting Sam’s internal monologue for every scene really helped me focus on the story and the circumstances instead of her petty, selfish observations.

Synopsis for Before I Fall (from Goodreads):

For popular high school senior Samantha Kingston, February 12—”Cupid Day”—should be one big party, a day of valentines and roses and the privileges that come with being at the top of the social pyramid. And it is…until she dies in a terrible accident that night.

However, she still wakes up the next morning. In fact, Sam lives the last day of her life seven times, until she realizes that by making even the slightest changes, she may hold more power than she ever imagined.