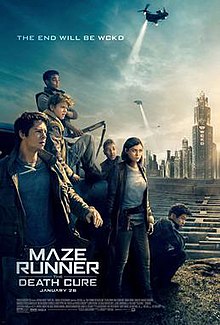 I adored the second book, The Scorch Trials, in the trilogy. The first book was so meh to me but the second one amped it up and had me eager for the finale.

And what a blah finale it was! I felt like this book lost direction, dragging out the finale answers only to leave you dry and waiting. We focus too much on Thomas inner monologue and worries and ignore the larger scheme of what is happening in the world. It just felt like I read a lot of filler and not much else.

I went in with high hopes only to be bitterly disappointed by the finale. I left with more questions than answers and this book just left a bad taste in my mouth about the series as a whole.

The movies in the series just kept getting better and better and that is definitely the case here! I had high expectations given how much I enjoyed The Scorch Trials and the ending. I never thought fondly of this book (it’s my least favourite in the series) but I knew that this would be a solid movie from start to end given its predecessors.

Thanks to the major changes that took place in the movie version of The Scorch Trials, the plot here greatly differs from the book. And I was totally OK with that! Seeing as I hated how things went down in the last book, this was a much better ending I think. In many ways it stays true to the spirit of the novel but the execution here is much stronger.

I’ve adored the casting in this series since the first movie. They are fabulous!

While it might have taken a little longer for the final movie to grace our screens, the wait was worth it! This adaption takes the strongest parts of the novel and flaunts them perfectly to deliver a movie that is entertaining yet often heartfelt.

Synopsis for The Death Cure(from Goodreads):

It’s the end of the line.

WICKED has taken everything from Thomas: his life, his memories, and now his only friends—the Gladers. But it’s finally over. The trials are complete, after one final test.

What WICKED doesn’t know is that Thomas remembers far more than they think. And it’s enough to prove that he can’t believe a word of what they say.

The truth will be terrifying.

Thomas beat the Maze. He survived the Scorch. He’ll risk anything to save his friends. But the truth might be what ends it all.

The time for lies is over.